There hasn’t been a whole lot of running happening around here this past week. I attempted a run early Monday morning and didn’t make it very far. I completely forgot to put on my belly band before heading out. Wow! I had no idea how much that really helps me to feel comfortable while running. I finished a little over a mile and then decided to head home instead of risking pulling a belly muscle.

22 weeks along and I feel big and uncomfortable already. I was hoping that running during this pregnancy would help me not feel so huge so soon…I guess not!

I did get my fair share of exercise in this week though. The kids and I went on a Fall walk to gather leaves for school. Of course I picked the windiest day and the park with the most hills.

Even so, we enjoyed our outing and found a lot of crunchy leaves. I was hoping for more red leaves but we mainly found yellow and brown.

We watched squirrels chasing each other and walked beneath leaves falling from the trees. It was beautiful. Just another reason why this is my favorite season.

No comments Posted in Running While Pregnant

The Scariest Thing I’ve Seen on a Run

I was pretty lucky this morning. I was running down the street minding my own business when I noticed that I was way too close to a SKUNK! I’m pretty sure it’s the closest I’ve ever been (and ever want to be) to a skunk.


He was watching me.

I just kept running (much faster) right by hoping that he would know I wasn’t a threat. I lucked out. As soon as I was past him he turned around and continued on his path.

I would never, of course, want to get sprayed by a skunk but I really can’t imagine it during pregnancy. My sense of smell is so much stronger during pregnancy…I can’t even imagine!

I was a little freaked out for the remainder of my run and I’ll be honest, I’m wondering if my morning run will ever be as relaxing as it was before this morning.

I’m really not surprised that I saw the skunk, we practically live in the country, but I’m just not happy about it. I’m a city girl and not a trail runner. I’m not used to encounters with wildlife while I am out for a run. Yikes!

Today was the second time that I woke up to run early this week. On Tuesday, I enjoyed a beautiful morning. It was cool but not cold. Breezy but not windy. And the stars! The stars were beautiful! I absolutely love running under the stars.


This morning I ran under the stars as well but I didn’t enjoy it nearly as much. Between the skunk scare, the much cooler weather and the crazy wind, I didn’t really notice the stars quite like I did on Tuesday.

I crossed the 500 mile mark for the year! I’ve been running off and on for most of my life but I’ve only started recording mileage in the past couple of years. 500 miles in 1 year is a record for me and I’ve been pregnant for the majority of it! Now I can’t wait to see how many I log in the final 2.5 months of the year.

No comments Posted in Uncategorized

Sunday was a day to run and a day to cheer on fellow runners. 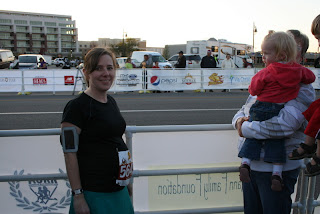 I signed up for the Mayor’s 5K Challenge as part of the Prairie Fire race series. I’m still running at 20 weeks pregnant even though I am running about 10 minutes slower (at the 5K distance) then I was before my pregnancy. It makes racing completely different but I’m glad I chose to run this 5K pregnant.

We cheered on the start of the full and half marathoners and then it was my turn to head to the start line.

I decided ahead of time to just listen to my body and run at a comfortable speed. I’m running for enjoyment right now and not to break any personal records.

There were almost 1,000 people in this race and it seemed pretty crowded at the beginning. It helped me to start out a little slower because there were a few times that I wanted to pass people and I couldn’t get through anywhere. This is the main reason why I’m glad that I ended up running this race during a pregnancy. It would have been very frustrating if I were pushing for a PR or even just a certain time but kept getting trapped behind people. I had the same thing happen at the Glow Run last summer. It’s just something that happens in the larger races. Hopefully next year I’ll run the half marathon to complete my races from this series (including the full last year.)

It was a beautiful morning. Clear skies and a little breezy. Mainly it felt good to push through the wind and it wasn’t too much at all.

After people spaced out a little I was really able to enjoy the scenery. The course took us through a little of the downtown area and then over the Keeper of the Plains bridge.

We followed the river back to the finish line.

I had a pretty good support crew with me and we decided to stay on to watch the half and the full marathoners finish running. We set up camp pretty close to the finish line and cheered on as the runners came in. 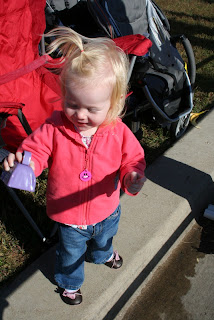 I knew a lot of people running but we were mainly there to cheer on my sister-in-law and other Team in Training runners. 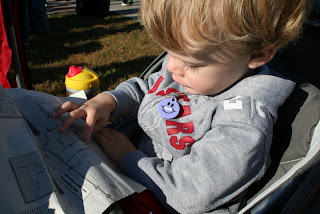 O spent some time with the map. He was trying to figure out where his aunt was running. 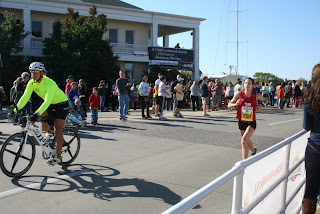 Here is a shot of the first female finisher. This was her first marathon and she finished in 2 hours, 59 minutes and 22 seconds! 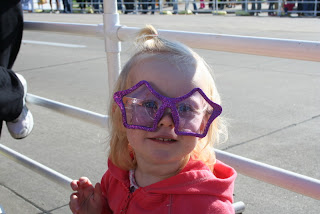 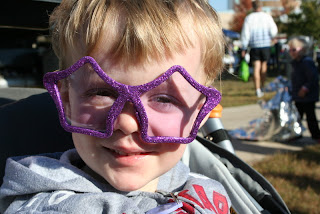 When you are hanging out with the Team in Training crew there is always something fun and purple around. 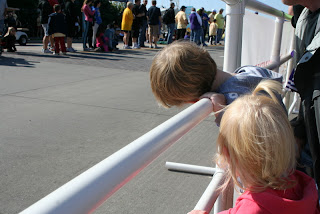 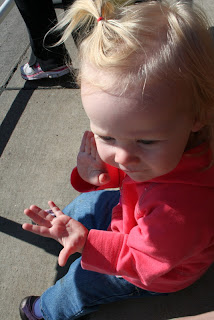 A little more cheering and clapping. 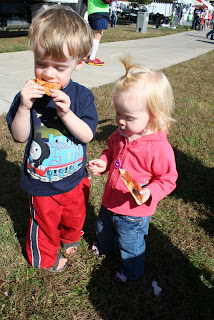 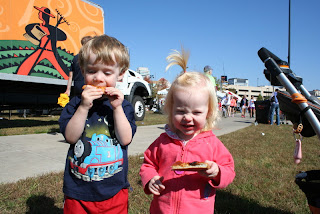 And finally lunch! It was a long morning from about 7:30 to a little after 1:00 but the kids (and the grown-ups) had fun. There was live music to dance to, good food and tons of people watching going on. What a fun race environment!