An Odd Postpartum Injury and my Weekly Running Log

Is it possible to injure ribs just by laying on them? Um, I think so. I was having a ball on the floor with my daughter. She was laying in this

and batting at her toys. So much fun! There were smiles all around. Then I tried to get up. I could hardly move because my ribs hurt so badly. It hurt to twist. It hurt to bend down. Sometimes it hurt to breathe or cough. I could barely hold my daughter! I was pretty upset because just when I was starting to feel comfortable with running again I get hurt.

I’m guessing that it’s due to my postpartum ligaments. I stretched out my ribs too much while I was on my stomach. ???

I skipped running the next day (Wednesday) and took an unexpected rest day. Thursday is our busy day and I usually don’t plan to run on that day anyway. Two days of rest was all I needed (Yay!) and I was back at it on Friday.

I was imagining a long drawn out healing process when it first happened so I’m glad it worked out this way.

Here’s what I did last week.

I ran fewer days but I ended up having the same mileage from last week because two of my runs were longer this week.

Friday’s run was on the treadmill. I stepped outside to run just when a big streak of lightning flashed across the sky. I’m so happy that we have the option to run in our basement when it doesn’t work to run outside. I ran a 10:13 pace during the 3 miles. It’s my fastest postpartum run yet. I’m slowly getting faster.


Have you ever had a strange postpartum injury?

What kind of weather keeps you running inside?

Why is Running so Popular?

It seems as though everyone is running and racing lately. I see runners out on the streets all the time. I see running posts all over facebook. So many of my friends have recently taken it up (even my husband who was a self professed NONrunner). Some ran a little off and on and then within the past several months have started signing up for races. Some have never ran in their lives but have now decided they want to run a 5K.

All this means that I get to talk ‘running’ with more of the people in my life. Bonus! It also makes race day more exciting when I see friends at the start and finish.

It’s wonderful that so many people are taking it up. I only imagine that more and more people will begin running after witnessing how the running community has come together after the Boston Marathon this year.

So why the increase? Why are so many more people lacing up their shoes?

I say this half kidding (I’ve definitely never been in the ‘cool’ crowd!) but in a way it is true. Talking to friends about running makes them want to run too. It’s commonly thought that running is a lonely sport but actually it can be far from that. Training for races and running races together is an excellent way to spend quality time with friends.

Helping a charity was the main reason I signed up for my first race. I had been a runner since middle school but never raced. I decided to raise money by running a Nike Half Marathon for the Leukemia and Lymphoma Society (LLS). 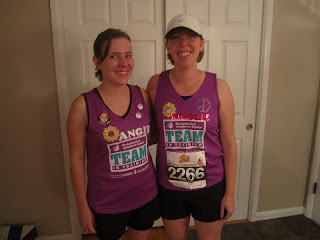 A couple of years after that I ended up running my first marathon with Team in Training to again raise money for LLS. I usually pick a local 5K that benefits a good cause. That’s why I am running the Girls on the Run 5K and Get Your Rear in Gear 5K this May.

Some people might start running to lose a little weight or just get in better shape. But when you set a goal to run a 5K (or any other distance) and you put down the money for the bib it motivates most people to train (run) and finish the race. The Couch to 5K training apps are used by many as a training plan for those new to running. I know that signing up for a race helps me to get out of bed on those early mornings to run.

These are just a few of the reasons that we see more runners signing up for races and hitting the pavement in between. I know there are many more so I want to hear from you too.

Why do you think that running has become so popular in recent years?

Do you sign up for races or do you run on your own?

My Five for Friday

Posted on April 26, 2013 by A Mother's Pace
1. Apparently, I’m not very good at Uno Moo. My son kept sending skunks my way and I ended up with way too many animals in my haystack. It’s one of our favorites!

2. Until owning one, I never enjoyed running on a treadmill. Now I am surprised to find out that I run more quickly on it. Although I enjoy running outside I am struggling with it right now. It’s so difficult to pick up the pace on the road. I’ve heard that treadmills are ‘easier’ because the belt is propelling you along but they were always harder for me mentally. Maybe I’m doing a better job of distracting myself because I just turn on a t.v. show or listen to a podcast and run. The time flies by!

I’m not close to my pre-pregnancy pace but I am getting a little faster postpartum.
3. This crazy looking cloud passed by our house. We sat out on our porch and watched the sky for awhile. There was no threat of a tornado but it did bring a lot of rain with it.

4. My book club met this week. I was glad that Little E was up for snuggles because I was no where near finished with my book. Somehow I made it through the book (I read it in 2 and a half days!) and loved it. We read “The Storyteller” by Jodi Picoult. The subject matter was difficult to read (WWII) but the characters pulled you in. It was tough to put down. I highly recommend it.

5. Our little sweetie is 2 months old! 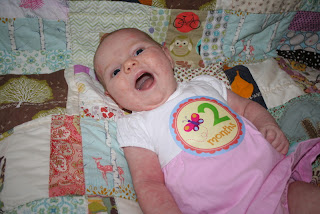