My Five for Friday

I’m jumping right in this week.

1. My husband is now running regularly. I love to see this

out on our porch.


2. I’m so happy my kids love books and love playing together, most of the time, of course. So cute that he is sitting in a bucket here.

3. I’m back to drinking darker beers again. After pregnancies I usually like light, refreshing wheat beers but lately I’ve been craving something with a little more substance.

My first time drinking this Milk Stout and I’ll definitely drink it again.


4. I may or may not have splurged on this delicious fruit cobbler. O.k., I did but I shared it with my two kids and it was so worth it!

5. My little super hero. I love him so much!

2 comments Posted in Family, My Five for Friday

Training Plans for the Fall

A couple of weeks ago when I went to the kick-off party for the Fall season of Team in Training I was pretty surprised to find out that their training plans for a September 14th race had already begun. That’s an 18 week training plan!

I’ve always used slightly modified versions of Hal Higdon’s training plans and so I’m used to a 12 week plan. Quite a difference!

I’ve been looking forward to planning out my training for awhile now. Things have been busy and I haven’t actually gotten around to it yet. But I really like that stage of training, the planning stage.


At first I was a little flustered, thinking that I was behind in the fact that I hadn’t decided on my training yet. (I decided long ago that I would do my own training and not follow the plan that Team in Training provided.) But then I realized that I didn’t have to have my ‘plan’ yet because I could still do my typical 12 week plan and have a few weeks to figure it out.

I’ve not only signed up to run a September half-marathon but I am also running a half-marathon with Team in Training in October. While I have done a half-marathon and then a marathon several weeks later, I’ve never ran two half marathons this close together before.

I want to do well in both of them.

Lucky for me, I noticed that The Runner’s World Big Book of Marathon and Half-Marathon Training has a solution for me.

It’s a plan to train for another half-marathon 4 weeks after the first one. Perfect! I will probably modify this plan a little, of course. I haven’t quite gotten there yet but I’m happy to have found a good model to base my training on.

I’m so excited to be training for a race again!

Do you write your own training plans? If not where do you get your plans from? How long does your training for a half-marathon usually last?

No comments Posted in Training Plan

Get Your Rear in Gear 5k Race Recap

This was the 3rd Annual Get Your Rear in Gear 5k in Wichita and it’s my 3rd year of running it.

Last year I earned my PR during this race and it was HOT! An evening race in the summer is tough but the atmosphere is so much fun. This year it was only in the lower 80′s so the temps were a little better. Not close at all to the 50′s and 60′s that I’m used to running in the mornings but better than in the 90′s of the past two years.

This year I am nowhere near the shape to try for a PR but it was my first real race since having a baby 3 months ago. By real race I mean one that I am actually trying my best and not running with friends for fun. 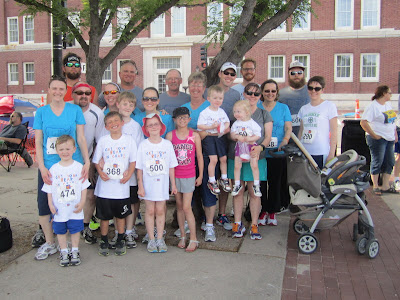 It was a family event in so many ways.

My husband was running this 5k for the completion of his Couch to 5k program. He was nice enough to run with me (since it was my birthday!) instead of cruising ahead like he could have. 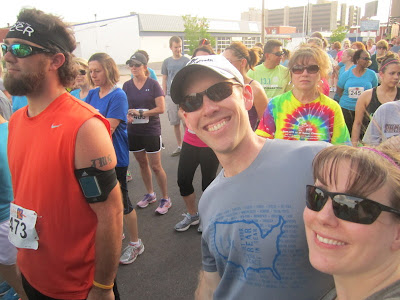 Once we were all lined up and the race started we took off very quickly. Pretty much a text book version of going out too strong at the beginning. This isn’t my first 5k, or race of any distance for that matter, but for some reason I thought it was o.k. to run a 9:14 pace for the first mile.

Um, I haven’t ran that quickly since before my pregnancy, by almost a minute!

Once the initial excitement faded we slowed down a bit but still stayed at a pretty good postpartum pace for me. I really wanted to finish the race under a 10 minute average pace and I ended up finishing just at that.

The course is a loop, which I’m not crazy about, although I love running in downtown Wichita. There’s just the added mental challenge when you are half way finished and you know you have to complete the entire loop over again. To me it just seems longer that way.

Speaking of half way, when we were coming up on the half way point we heard the bell of the lead runner bicycle behind us. C.J. and I kicked it up a notch to try and get to the turn off point before the lead runner lapped us. We made it, just barely! Speeding up like that in the middle of the race was tough but the burst of energy was fun.

The second loop was pretty hard. The heat was getting to me and it was getting harder to hold the pace that we were running. But I hung in there and was very thankful to have my husband by my side encouraging me at the end to stay with it.

We ended up finishing officially at 31:32. I wanted under 30 minutes but I really can’t complain about the results. Not bad for the heat and the fact that I’m still working on increasing my pace at 3 months postpartum. 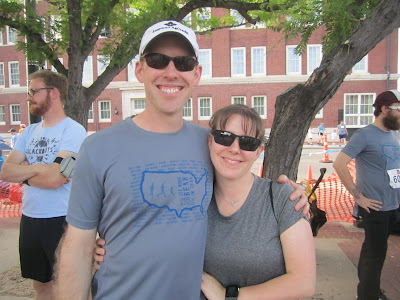 The after-race party was great. There was a band, good food and beer. Gotta love a beer after a race, especially when it’s an evening one. Heck, who am I kidding, I love beer after a morning race too. :)

It was a fun race and a great birthday! I can’t wait to run it again next year to support the Colon Cancer Coalition. 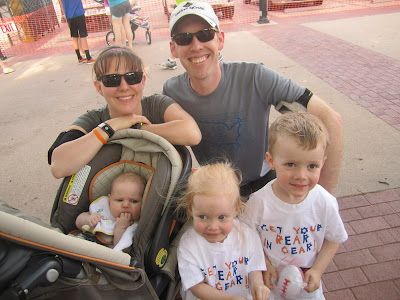 No comments Posted in Get Your Rear in Gear, Postpartum Running, Race Recap
« Older Entries