Birthday Festivities and My Running Off Season

We celebrated over the weekend with our family and friends.

She had a Dora themed party with a Dora cake. Little A helped with the flowers on her dress.

We’re celebrating more today with some homemade pizza and cupcakes tonight for dinner and dessert. 3 years old! Where does the time go?

Last week was a good week for running. I don’t have a specific race on the calendar so I’m just taking it easy during my ‘off season.’ My busy weekend of birthday festivities led to a run-free weekend.

It’s starting to get really cold here. One of my runs from the week was a windchill of 12 degrees. Brrr!! I do have the treadmill to fall back on but I still like to get out and run even if it is super cold out. 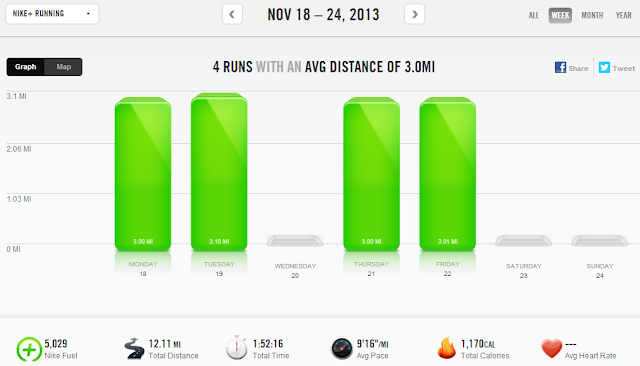 How do you run during your off season? Do you run outside during the freezing cold?

Counting Down the Days

Friday is finally here! We’ve been counting down the days for a couple of weeks now.

Little A’s birthday party is this weekend and we have family coming in town to help us celebrate. It will be a busy but fun-filled weekend. We are ready to party!

[1]
I love the peacefulness of running alone in the early morning darkness. There are hardly any distractions. No other people, cars or music just nature and my thoughts.

[2]
I take way too many sleeping pictures of my children. I can’t help it and I also share them with people. Here are a couple a lot from this week.

[3]
Both of my older children love to dress themselves. Most of the time I let them stay in the clothes that they choose. Outfits usually consist of mismatched socks and comfy pants…I mean, who can blame them? This is one of my recent favorites:

[4]
5K’s are hard. It’s probably my least favorite racing distance so far. BUT I really want to run one under 25 minutes so I’m going to keep signing up for them and racing them until that happens.

[5]
When did she get so big! Just started crawling and now she’s already pulling up on furniture. I’m sure she just wants to keep up with the other two. Nine months old next week!

Tell me something random about your Friday.

2 comments Posted in My Five for Friday 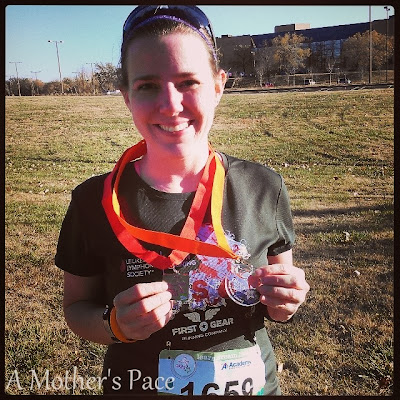 The Girls on the Run 5K is a race that I try to run every year. Last year I ran it at about 6 months pregnant. This weekend I ran it at almost 9 months postpartum.

It’s a mid-afternoon race, the 5K started at 2 p.m. and the Kiddie K started at 3:15. The Kansas wind was blowing on Sunday but what made it worse was all the leaves and stuff that the wind was picking up. I’m still sneezing from being outside in the wind all afternoon.

Girls on the Run is a great organization that not only encourages girls to exercise but also provides lessons to help the girls learn confidence building skills.

Working up to the 5K many local children train with their coaches to run the race. Going into this 5K is different from others for me because it is all about the girls. Encouraging the girls throughout the race and really just being inspired by all of their hard work. I’m not a coach but this is definitely an organization I would like to become more involved with as my children get older.

I was a little amazed by the number of people participating in the race this year. When we arrived a half an hour early (usually this gives us plenty of time) the parking lot was already full. We eventually found a parking spot though! 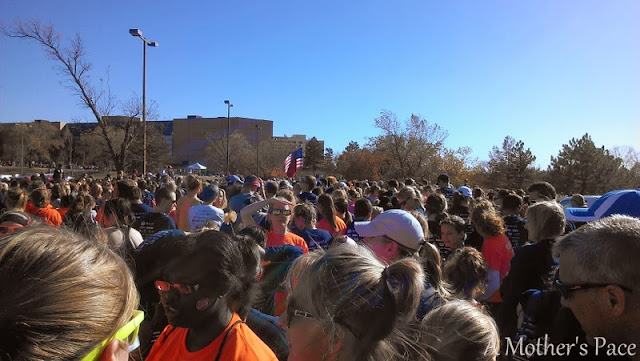 The start line was very congested. It’s not a race where people line up by their expected pace. A lot of the girls are in front. They are excited to run and that’s what the race is all about. That said, after the race started I spent most of the first half mile walking, jogging and swerving between people. The race wasn’t a PR for me but, considering the start, I’m very happy with my overall time.

Once I was able to start running I just got into a pace that felt good but still challenging. I love running through this neighborhood (my high school cross country team used to run in this area) and enjoyed the scenery a lot because of that.

At one point I was right behind a girl running with her dad. She was doing an awesome job. She was telling him about her race last year. She said that it really hurt to run but she stuck with it and kept going. When she finished she was 3rd! I thought a lot about her as I was running the race because she’s right. 5K’s are tough. They hurt but you just need to hang on and keep running.

Before I knew it I was coming in for the finish, an uphill finish. I saw my family though and that helped to give me an extra push at the end. 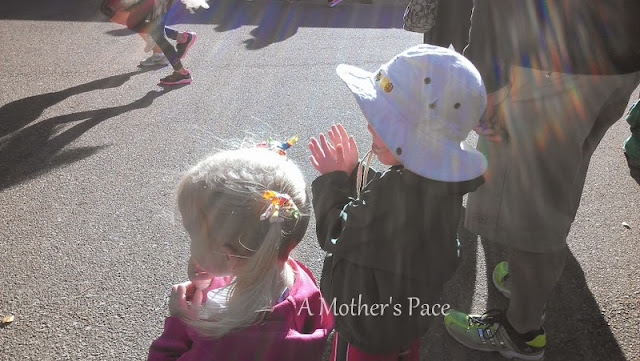 Later, when I walked over to the results table, I was very surprised to find out that I placed 2nd in my age group! Now we get to the fun part, the Kiddie K. Both of my older kids ran the race and had a ball. 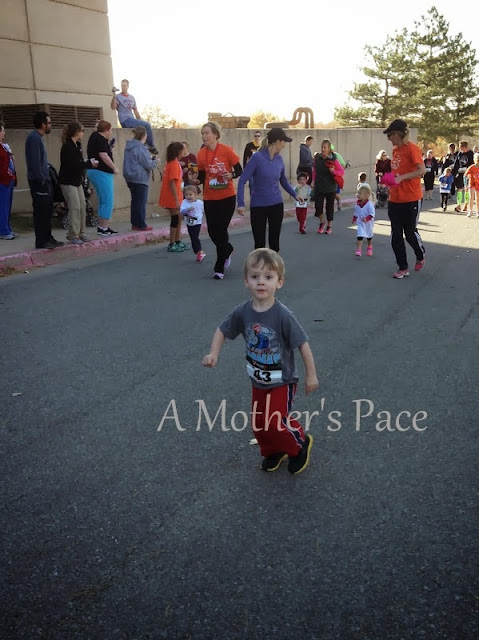 They were both pretty excited before the run and Little O wanted to win.

He didn’t win but he was a very determined runner! 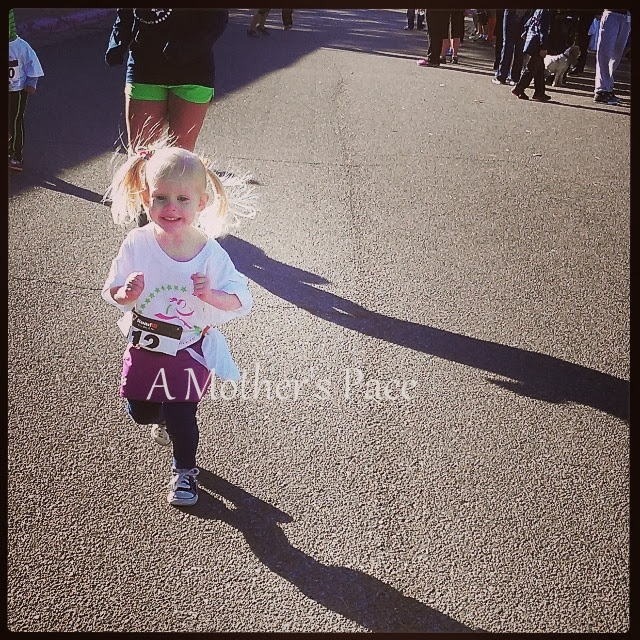 Little A and I ran together. She had on her favorite ‘running’ shoes. After the race was over she said she wanted to do it again. That’s my girl! 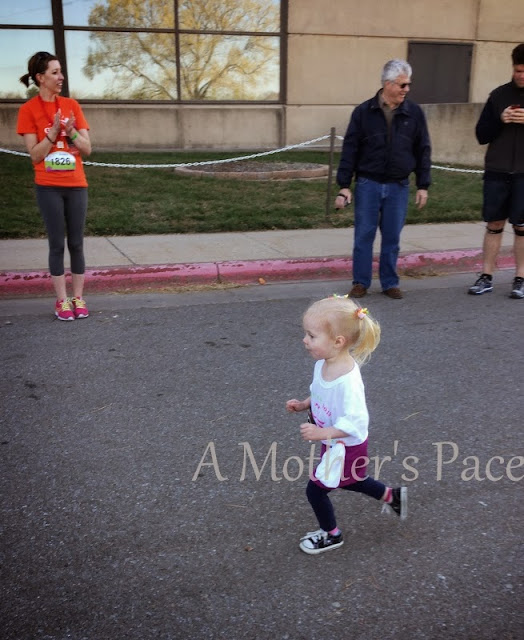 The goofball finishers and one proud mommy! 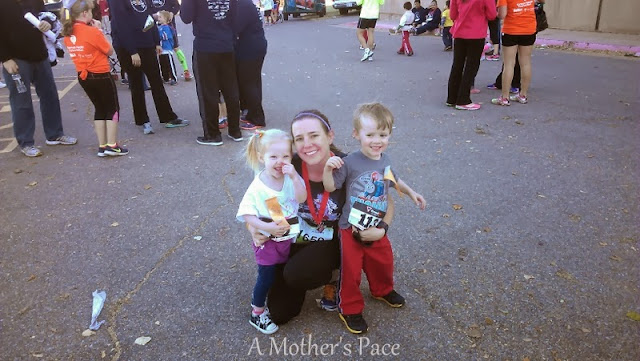 And then, celebratory ice cream, of course! 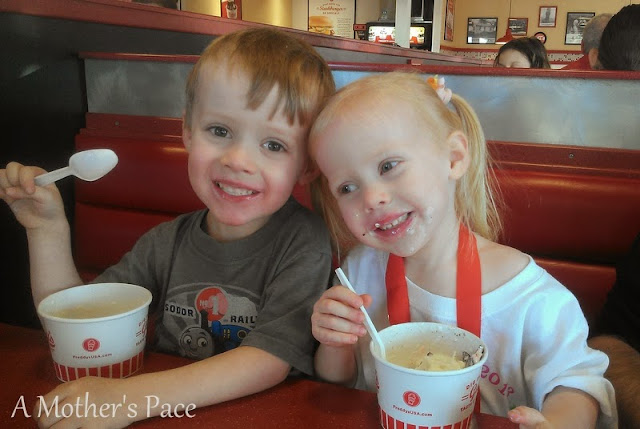