Running in 2013 was a roller coaster ride. I was so happy to be back at running after the birth of my third daughter but it was tough. I wasn’t expecting it to be such a long ‘comeback’ but it was quite a journey.

My goal race for the year was the Prairie Fire Half Marathon in October. Even though I did not end up with a PR, my training went very well and I was happy with this postpartum race.

All throughout the month of December I was trying to reach the next milestone of 600 miles for the year. Actually, I had no idea that I added incorrectly in my training log somewhere. After comparing my paper log to Nike+ month to month I realized that I actually surpassed 600 miles much earlier than I had thought. Of course I only figured this out yesterday… The good news is that my mileage is a lot higher than I thought for the year!

Speaking of mileage, 2013 was my highest mileage year yet. Although I already have plans to leave 2013 in the dust when it comes to mileage next year. 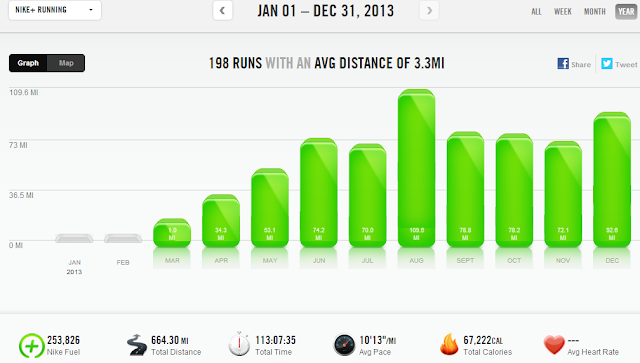 Are you a numbers geek like me?
Do you like to look back on all the running numbers of the year?

No comments Posted in Yearly Recap