Posted on September 2, 2013 by A Mother's Pace
Labor Day started out with sleeping in. I woke up and saw that it was 63 degrees outside and thought about running but I decided to have family time instead. We had a bit of a lazy morning with pancakes, eggs and coffee.

We also got started on our fall garden. The kids dug holes to help put our watering system in.

It warmed up to the mid 70’s pretty quickly but I still decided that a run outside would be much better than on the treadmill. I just planned a shady route and so the strong sun didn’t bother me very much.

I kicked off my 5 and 10 Virtual Race Series yesterday with a fun 5 miles. It was one of those runs where I had a silly smile on my face throughout the run and completely felt that Runner’s High after I was finished.

It was a fast run for me at my postpartum stage right now. One of my quickest and longest that was not on the treadmill. Going quicker on the treadmill is a lot easier for me so the fact that I was able to hold this pace for 5 miles gave me a lot of confidence. Confidence that I WILL be able to accomplish goals during my fall races.

It’s exactly what I need right now in my training. I need to know that I can run under a 10 minute mile for a longer distance. One of the best things about this run? I could have kept going. It didn’t wipe me out and I wasn’t wasted by the end of it. Even if I don’t have another great run before my race I know that I ran these 5 miles and that will give me the CONFIDENCE that I need on race day. 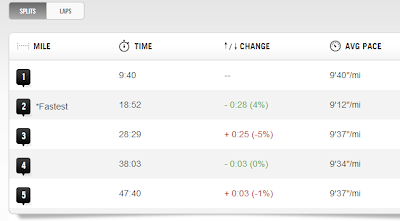 I didn’t have a negative split but my first mile was the slowest. That’s something that I’ve been working on but it doesn’t always happen.

This one definitely goes down as a #BestRun in my book.

Tell me about your most recent best run.
Edited to add: Linking up with Running Blogger’s Fitness Friday.

All runners love when everything comes together at the right time to make that perfect run. The conditions are right. Your legs feel good. You feel like you can keep running forever.

Lucky me, my speed work run last week was just that kind of run. It didn’t start out that way though.

Friday morning I got out of bed and started to get ready to run. That was when I saw the lightning. Still I was going to head down to the treadmill but that was when my daughter woke up. I had to nurse her so that delayed my run even more.

I probably could have squeezed in a run on the treadmill but I just wasn’t feeling it anymore.

Instead I decided to wait until after my husband got off work and run then. This hardly ever works in reality. Dinner, kids and the evening take priority and the run gets pushed back or not done at all.

This night was different. My husband got off work and I headed right downstairs to the treadmill. Dinner could wait just a little longer, right? (Really, while I ran my husband grilled burgers!)

I haven’t been on the treadmill in awhile and maybe that had something to do with the fact that it was fun. My goal for the run was a 6.5 speed which puts me at about a 9:14 pace. (Goal pace from the McMillan Running Calculator.) This is my first postpartum tempo run and it ended up being the perfect mix. Tough enough for a great workout but easy enough for someone just getting back into some tempo work.

It’s easy to plug in other speeds as well. Just use a pace calculator to figure out what your goal pace should be. Start warming up -1 of your goal pace. Once you reach your goal pace just add .2 each half mile. Then do a cool down in reverse from your warm up. 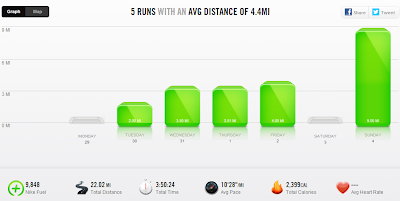 Are you a treadmill runner? Do you like running tempo on the treadmill?

Posted on April 8, 2013 by A Mother's Pace
Today I’m linking up with Miss Zippy to share my #bestrun. Most people would consider a best run to include one or all of the following: great weather, speed, ease of running, or a beautiful location. My most recent best run included NONE of the above. But it was fabulous and I enjoyed every second of it.
Last week I ran in the afternoon. My mom came over to watch my 3 children (ages 5 weeks to 3 years old) and I hit the pavement.
Weather:
I had been looking forward to the run all day even though it was cold out.  As I was putting on winter layers getting ready to run I decided that I was probably one of the only runners excited to put on the extra clothing. My winter running clothes didn’t get worn very much this past winter so pulling them out in the spring was a little exciting for me. Boy, was I glad I had them on. It was windy, cold and even rained on me a little.
Speed:
Since I’ve started running again I’m slow. I wish that my fitness level was the same as when I stopped running but obviously it is very different. It’s going to take some time to build it back up again and this run was no exception.
Ease of Running:
This one goes hand in hand with my lack of speed. Overall running is tough but even what I would typically consider an ‘easy’ run is difficult right now. I’m building up my base again and I know that by working hard at it I’ll slowly gain both speed and ease.
Location:
My most recent best run happened in my neighborhood. While I love where I live, running up and down courts and circles isn’t the most scenic location.
So why, if I had all of these factors going against me, do I consider this my most recent best run?
Two reasons, really.
I’ve just started running postpartum again and I’m excited to run no matter what the conditions. I’m definitely NOT taking running for granted right now and I’m enjoying every second. The conditions don’t matter, my performance doesn’t matter and the scenery doesn’t matter. This run was special (or my #bestrun) because I realized all of this during this run. Everything was going against me but I still loved it.
This run was also my first time to use @CharityMiles to raise money for The Leukemia & Lymphoma Society. Especially considering that I was doing something that I was going to do anyway, it’s pretty fantastic that I was able to earn $.56 for my favorite cause. #everymilematters
So now it’s your turn. Link up with Miss Zippy and share your #bestrun. Or tell me about your best run in the comments below.
——————————-